Waterfall exploring and relevant other outdoor activities involve risk to both persons and property. There are many variables including, but not limited to, weather, fitness level, terrain features and outdoor experience, that must be considered prior to seeking or playing around at waterfall site. Be prepared for your journey and be sure to check the local current weather and conditions before heading outdoors. Always exercise common sense and caution.

The guide and GPS coordinate provided in this webpage is for reference basis, the author (Snail-WORKS) provides no warranty & disclaims liability on any damages or loses whatsoever arising from its use.

DO NOT use the information if you do not agree to this condition!

Wish you have a great waterfall trip!


Note :  Please don't use all the images on websites, blogs or any other media without the author's explicit permission.

The Botanic Gardens on Penang are located at the end of Jalan Kebun Bunga (Waterfall Road), it is about 8 kilometres form the Georgetown city. You can reach it by using road no. P208.

There are many nature trails can be ventured into from Botanic Garden.


The Penang Botanic Gardens also known as the "Waterfall Gardens" because of the spectacular waterfall within the park. The original gardens were established in 1884 and under the supervision of Charles Curtis, the first superintendent.

Here is the reference picked from Wikipedia about the Penang Waterfall.

" The waterfall and reservoir are private property although they can be visited by arrangement with the Penang Water Authority (Perbadanan Bekalan Air Pulau Pinang). The Friends of the Penang Botanic Gardens, a non-governmental organisation, organises monthly visits to the waterfall. The Penang waterfall was closed off to the public as a safety measure during the confrontation between the newly independent Malaysia and Indonesia in the 1960s.
(The Friends of the Penang Botanic Gardens had stopped the monthly visit to the waterfall at ths moment, you may contact them to check about the trip.)

Early visitors to Penang Island described it as one of the key attractions of the island, including Ibrahim Munshi, son of Munshi Abdullah, who described it in his journal, the "Kisah Pelayaran". The waterfall was an important source of water for ships calling at Penang port in the early part of the 19th century. In 1804, the first water treatment plant in Malaysia was set up here, to supply the needs of 10,000 people in Penang. In 1805, an aqueduct was constructed to channel water from the fall via Pulau Tikus to a reservoir near the port. The quality of the water, filtered through the aged rocks of Penang Hill, was very high, and was described by the early sailors as "sweet".

The oval-shaped reservoir of the Penang Waterfall was constructed in the gardens in 1892 by British engineer James MacRitchie, who was also responsible for the MacRitchie Reservoir in Singapore, built in 1894. The Penang reservoir was reconstructed in 1950. 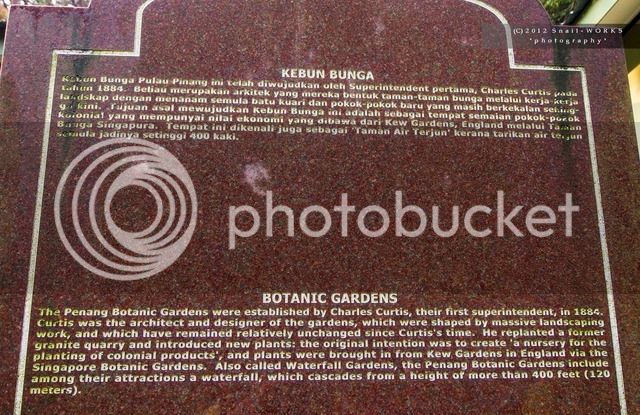 Waterfall is located at the upper part of waterfall reservoir. Surprisingly, the waterfall view is spectacular, water is gushing down from the 2 steps high cliff.

The view of lower part river from the waterfall.

Have you been to the Penang Fall?